are supported, as well as live database backup on server and client systems.

Here is an example of a BRU Server™ workflow as used by TOLIS Group, Inc. 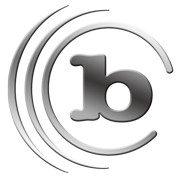 Read about BRU and SUSE, together since 1996

*Windows support in BRU Server™ is available as a Client/Agent and Management GUI, BRU Server's Server Component must run on macOS, Linux, or Unix, or bruAPP™

If you update to Apple's macOS version 10.15 Catalina on mission critical systems where you are using tools like BRU™ to perform data backup operations, you must be licensed and using ArGest® Backup v4.x or BRU Server v2.0.6.  If you do not have a license for either of those products, please contact BRU Sales to determine your upgrade eligibility.  Also, please back up your BRU™ software environment before updating to 10.15.
BRU PE™ v 3.x or earlier and BRU Server™ v2.0.5 or earlier are not comaptible with 10.15.

Because backup and archiving is not a one-size fits all solution, the BRU products are individually designed to meet all needs.  Out of the box, ArGest® BRU Server™ v2.0.6 software supports unlimited data amounts for backup with no additional fees in single BRU archives up to 16 exabytes each.  The BRU™ engine natively powers our macOS backup software solutions, our Linux backup software solutions, as well as providing the reliability, speed, and power behind our tape hardware and disk storage solutions.  FreeBSD 11 and 12 are supported both as clients of macOS or Linux BRU Server installations, and also as a BRU Server Server host for disk only operations.

ArGest® BRU Server™ v2.0.6 never assumes that the data you write to disk or tape is data that is actually recoverable and provides the assurance that the data you think you have backed up can actually be restored. BRU™'s error recovery algorithms used when writing to tape provide reliability mechanisms unlike any other backup product on the market. BRU™ can even restore data from the readable portions of a physically damaged tape.

These features are discussed in depth in our white papers titled: The BRU Advantage and Reliable Verification with BRU.

What makes BRU better than all other formats?

Speed.  BRU is the fastest software available.  Streaming SAS LTO-7 and LTO-8 at 322MB/sec (see more details about achieving this LTO-7/LTO-8 speed) and LTO-6 at over 160MB/sec with ArGest® hardware, BRU™ software.  Even better performance and lower latency is seen with BRU and Fibre Channel LTO-7 and LTO-8 tape.

True cross platform recoverability.  All BRU™ archives are verifiable and restorable on any OS BRU supports (there are currently 24 of those), and with any version of BRU regardless of the OS they were created on.  BRU™ is fully backwards compatible, and BRU™ will never leave you with archives tied to a data set, specific OS, version, or type of hardware.

Verifiability and error recovery for restore.  BRU™ archives are properly and fully verifiable on any OS BRU supports at any time, and is the only backup tool that can recover from errors–if a bad bit is detected on your media, BRU™ advances in device block increments until it can read and restore the data once again without aborting your restore.  And if your archive spans multiple tapes, and you lose a tape to damage or theft, BRU™ will restore all the rest of the data from all the tapes you have, something no other product will do.

Accountability.  With BRU™, you have a source for help and a company that has been committed to data backup and restore since 1985.

Flexibility.  BRU™ supports almost all tape devices, VTL, cloud, and and disk storage out of the box.  Full support for SAN configurations and live database backup on Linux, macOS, Unix, and Windows with the Windows Open File Manager.  BRU™ also provides multiple workflow options for backup/archiving/restore of the same or different data simultaneously.  ArGest® BRU Server™ supports any number of tape drives attached, and up to 99 tape slots in a single library out of the box, for 100+ tape slots enabled on a library, add the 100+ tape slot add on to unlock 100-an unlimited number of tape slots supported.

Best Business Practices.  All BRU™ products are fully compliant with best business security practices including those mandated by Sarbanes-Oxley.

Here is an example BRU Server™ workflow as used by TOLIS Group, Inc internally in our labs.

Exclude specific files or file types from your backup

Questions about Executing Tasks Before or After a BRU Server Job Run?

For those that are looking for a system example: ArGest® BRU Server™ System For Example Purposes

Bottom Line. Your organization's data is critical, and how to protect it is an important decision. BRU™  delivers the reliability, functionality, flexibility, scalability and overall excellent value necessary to provide you with backup peace-of-mind.  Download your fully functional 30 day demo here.

How to Choose the Correct BRU Server Software Package

BRU Server software packages are identical in operation and are only differentiated by the number of included clients with the initial package purchased.  All BRU Server packages, except for the single system support BRU Server Desktop Edition, may have additional clients added as the need for more systems to be backed up grows.  The client machines may be any OS supported by BRU Server and version of the OS (desktop or server) makes no difference to BRU Server.

BRU Server, out of the box backs up an unlimited amount of data with no additional fees.  BRU Server works with existing hardware or cloud services and is also available bundled with tape and disk storage hardware in TOLIS Group's ArGest® Hardware/software bundles for single source shopping, warranty and support help on all items related to the backup/archiving task. 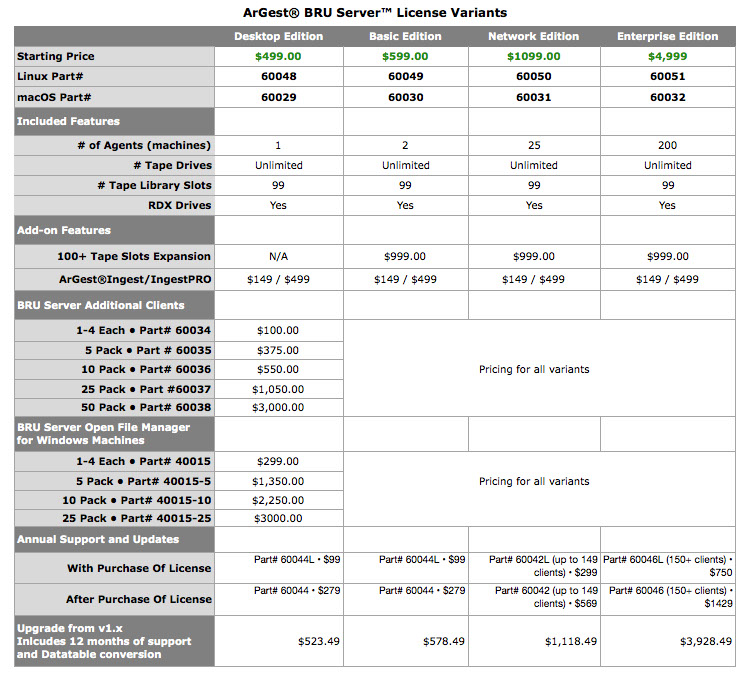 Back up any machine on your network

BRU Server™ considers any machine on your network to be just that–a machine so all you need to worry about is how many machines (BRU Server™ authorized client count) you will need to have.  BRU Server™ does not make a distinction between client/server versions of the OS or hardware type on the machine you want to back up.  Additionally, the BRU Server™ Agent is an extremely lightweight process.

Even if a user is working on the machine when BRU is running its backup, BRU will slow itself down to free system resources up so the user barely, or not at all, knows BRU is running at the time.

With special client-side backup and restore operations that are authorized for the client machine by the BRU Server admin, desktop and even laptop users on unusual times connected to the network can back up and restore on their own schedule and never miss being protected by BRU.  The client side backup and user initiated restore is available on Windows, macOS, and Linux.

Windows systems running Active Directory, SQL, Exchange, or those that have have any other open files may be backed up at no charge with bruAPP™ BRU Server™ pre- and -post freeze and unfreeze job support, or you may use the add-on Open File Manager for automatic background open file backup for an additional charge.

Note to Virtual machine users:  Depending on your configuration, guest systems of the host system may or not need to run a BRU Server™ Agent.

BRU Server's elegant design allows it to be a very lightweight process, and as such does not require a specialized system in order to perform its assigned duties.  Older hardware right up the bleeding edge hardware of the moment are supported.

For those that are looking for a system example: ArGest® BRU Server™ System For Example Purposes

Instructions from download, to install component order, to first backup, to first restore.  As a true client/server product, BRU Server is a three component based product.   The Server Component is installed on the machine that will be attached to the storage device.  The Agent Component is installed on any machines that are to be backed up as clients of the BRU Server Server machine, including the machine with the Server Component installed if that machine is to be backed up as well.  The GUI Management Console is installed on any machine, Mac, Linux or Windows that can see the BRU Server Server machine on the network and is used to manage and control all operations of BRU Server.

Everything a system Administrator needs to know about BRU Server's usage.  Chapter one is a duplication of the QuickStart Getting Started Guide.

Excluding Files from Your Backup

This document is for users moving from BRU Server 1.x to 2.x only

The BRU Advantage - Details on the elements that make BRU so effective.

Proving the BRU Advantage - BRU was originally developed because tar fails–see why.

Tape's Not Dead Tech - Tape is not a dead tech, it is fast, easy to use, and nothing else will protect your stored data as effectively for as long.

BRU Server and Parallels - How BRU and virtual environments such as Parallels and VMWare work together.

BRU's Support of Regulatory Governance - BRU ihelps you maintain compliance with government/research/medical regulations for backing up and recovering data.

Tape vs. Disk vs. VTL Backup Options - BRU allows you to back up to any device type that works for your environment.

LTFS - One look at why LTFS is not the best choice for long term archival.

Tape Data Formats - BRU is proprietary, and why that is a good thing for your long term data protection.

Chapter One of the BRU Server Administrator's Guide is the the QuickStart Guide with all steps from install order, to first backup to first restore.  If you
need assistance with installation/setup/operations that are not clear from the QuickStart Guide, please contact TOLIS Group Support before continuing
with your setup so we may help.

Any guidance or direction TOLIS Group provides to you will only be based on the information provided by you to us as our customer. Many factors in your environment are unknown to TOLIS Group and can affect advice, problems, outcomes, or recommended solutions. TOLIS Group cannot and will not accept any culpability or responsibility due to potential omissions. Also, be advised that technology changes. As a result of these changes in technology, products you are using might be affected both directly and indirectly. TOLIS Group cannot and will not be responsible or liable for any consequences that can occur due to any change in technology, or in conjunction with the use of information provided by TOLIS Group under these circumstances. Proceeding with communications, orders, and interactions between yourself and TOLIS Group is indication that you understand and agree with this statement.   For complete warranty, legal, and return policy notices, please visit http://www.tolisgroup.com/brulegal.html

Copyright 2001-2020.  All trademarks, tradenames, service marks, and registered marks are the property of their respective owners.